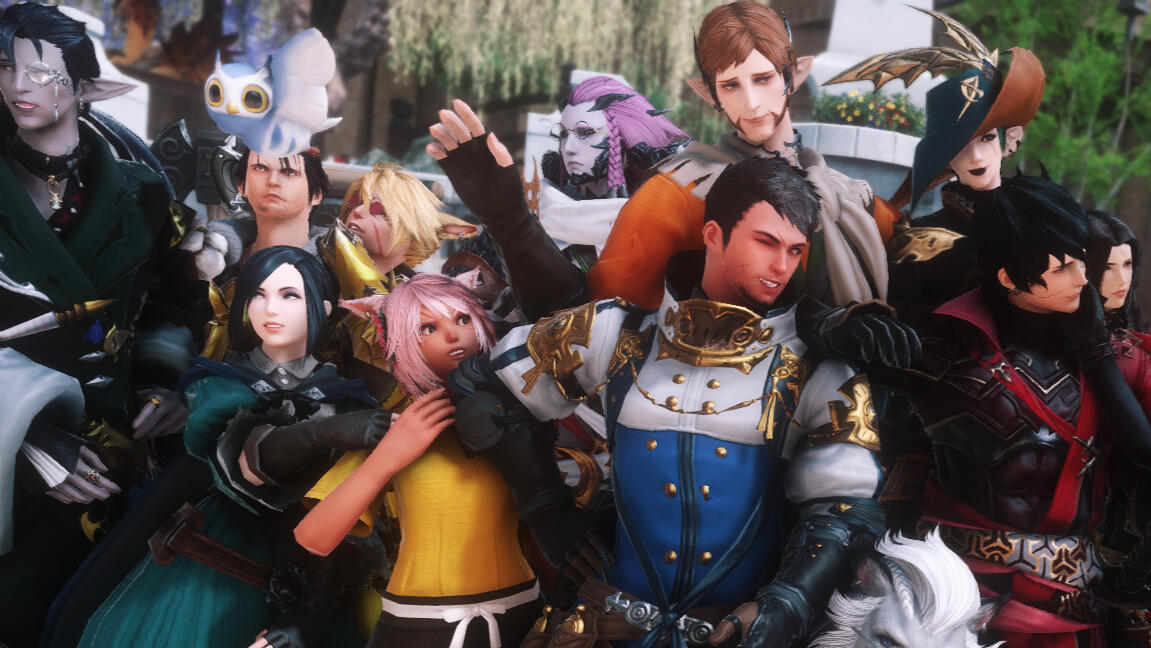 A band of adventurers looking to better the world, one job at a time

To the weary adventurer...

A home. A hearth. A hall to share tales and stories. A family with which you experience these enthralling retellings and share in the joy they bring.

This is what the Ebonheart Company strives to be. An adventuring free company that dedicates itself to bettering the world, one job at a time.
In the wake of war, chaos, and the shifting gears that is the change in the world, it is necessary to see to the continued betterment of the community and the people that are left behind in its dust.

Those inside the Ebonheart Company seek to ensure that goal is fulfilled.

The Ebonheart Company's Hall is located in the Mists Ward 20, Plot 45, where a plethora of job requests, leves, and company-organized missions are pinned to the board inside.

While part-time adventurers and contractors are welcomed, regular members are given many amenities in service to their unending work.

These include but are not limited to: free room and board, access to the company's food stores via the downstairs bar and lounge, several places of relaxation and study, dedicated workshops for our craftsmen, and an in-company clinic to treat the injuries sustained from the jobs completed.

[ Founded in 2019, The Ebonheart Company is a long-standing active RP/PvE Free Company located on the Crystal Datacenter in the server Balmung. TEC is primarily NA-based but has a scattering of folks from the EU/AUS.

We were founded initially because of how few adventuring companies there were and wanted to create a space that was both welcoming and accepting of both hardcore players and those that had to balance both life and work.

Since then we've expanded, learned, and grown over these last 2 years and have inspired countless others to embrace the very same concept! Yet, even to this day, we continue to aim to try and provide a warm, welcoming environment for Roleplayers, old or new!

We know that people have lives and, now more than ever, have to tend to them. That's why the Ebonheart Company is comprised of like-minded adults who aim to share the goal of having fun! Whether that be by constructing story-lines, engaging in RP, running content, or simply by hanging out!

We hope that we create that feeling of kinship for however long you decide to have your journey with us! Our active times are usually 8 PM EST - Midnight during the weekdays, and Noon onward during the Weekends! ] 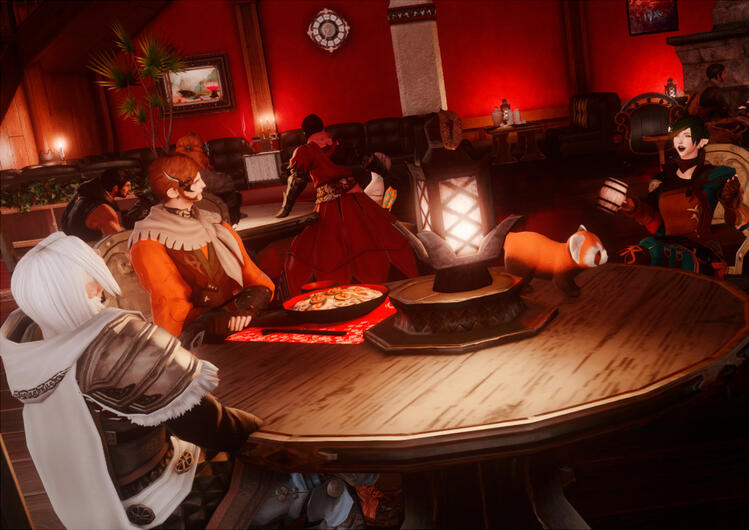 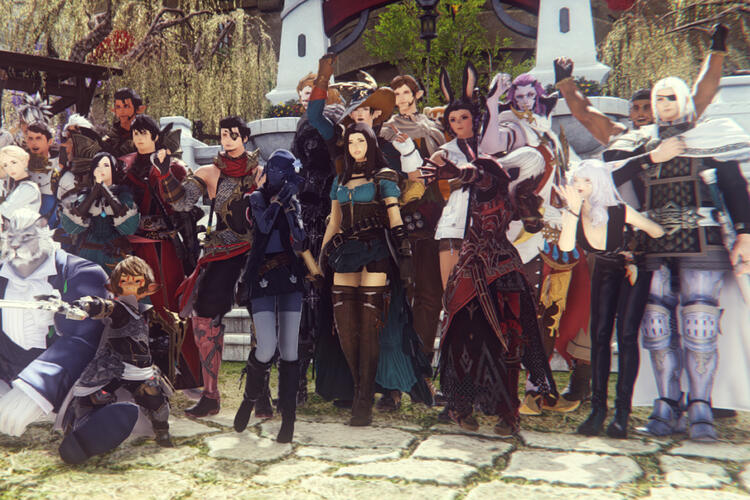 1. Don't be that guy/girl. We are all part of the same group and while we're not bound to be friends with everyone, instigating fights, putting out controversial opinions, and passive aggressive behavior will not be tolerated.

Mandatory expansion: Don't be racist, sexist, ect ect. Be kind unto one another.

2. If you have a problem, seek an officer. If you'd rather not involve them, try to work it out. Above all else do not drag your misgivings or drama into the public light. We are all adults here, we want to try and resolve conflict like adults!

3. Please keep controversial subjects (religion, politics, ect.) off to PMs or in a designated discord channel if there is one!
This includes in voice chat as well.

4. We believe in people being creative. Taking the lore of a given setting and using it to tell a narrative with each other. Some parts of the lore are vague or have wiggle room to work around and all of that is fine, within reason!

However, we do not condone outright lore-breaking such as being the son of Haurchefant or being able to cause a Calamity single handedly. We aim to have believable characters that abide by the lore but also utilize some creativity in the areas of lore that make sense.

− If you think you have a lore bendy/breaky character and wish to work through finding lore consistent explanations or backgrounds, please feel free to reach out to the leadership and your fellow members to better align your character! In the end, we all want a fun, but fair experience in our role playing.

5. The third slot and below in the FC Bank is free-for-all, take or deposit whatever you want.

6. No NSFW allowed (pornography, sexually explicit images, sexually suggestive content, or anything that goes against Discord Terms of Service) for images or text.
−This extends to sexual and mature themes within FC. While mature discussions can be had, remember your boundaries with your fellow FC mates.
−Any instances of sexual harassment or otherwise predatory behavior will result in immediate removal from the FC.

7. While you do have the rule, do not abuse invitations. They are meant for alts or to other people as directed. If you have a referral and wish to invite, contact the leadership first.

8. Any member that is over 180 days inactive will be removed unless prior notification of long-term leave is given.

9. All members must be at least 18 years or older.

11. We do not accept underage PCs.

1. Respect the orders given to you in a mission, at all times. We may be adventurers, but structure and organization is the key to success and a cohesive team.

2. Respect your fellow adventurers-in-arms. While we are bound to not like others and have conflicts, keep these to a minimum.

3. Unsanctioned duels and/or fighting on or within the Company grounds is disallowed.
Failure to comply with this will result in a tribunal before chosen Company representatives.

4. Above all else, fight to better; if the job itself has gone awry or there are no clear objectives, then follow this one: Do what would best benefit the world. I enjoy RP and PvE and occasionally: PVP (it's not that bad!).I run events and try to RP despite my quickly filled schedule, feel free to reach me on Discord @ChaosKillerX7#0715!

Talan is my primary character, leader and founder of The Ebonheart Company. He's a wanderer at heart and almost always has a positive outlook on life itself.It's his goal to inspire the same feeling of wanderlust that was inspired in him through job or leadership. 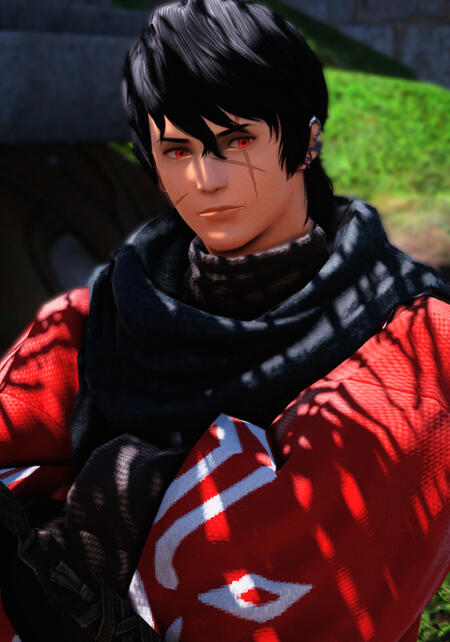 Hello, I am Tachi. I've been playing since Heavensward and one of TEC's founding officers.

I enjoy RP and PvE, often trying to juggle my schedule to fit in as much as both as possible. I run story events, both large and small, and if you need help with content I will do my best if I am available. Feel free to contact me in-game!

Tachi the character is a samurai on a quest to become a hero, to ensure no one suffers the same way he had from the liberation wars of Doma and Ala Mhigo. He loves physical training and cooking, and loves the chance to prove himself useful to the people around him, even if it was out of his field of expertise. Oh, and he also only found out two years ago that he inherited title and land. 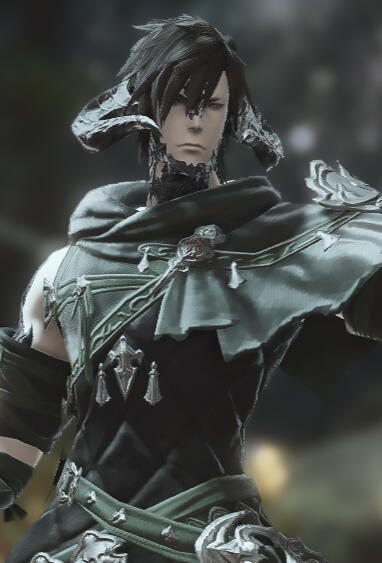 Name's Yesupie, don't wear it out! I'm one of the Senior Officers here at the Ebonheart, and I've been playing FFXIV since ARR.

I like to RP, PvE, and if you bribe me with enough chocolate, PvP! I run story events that range from silly and fun to serious and gloomy. Need help with content? I'm your contact on Discord @Yesukai#6362.

Akino Hanakawa is my primary character, the Head of the Ebonheart Infirmary, and local Receptionist. She loves to bake, she loves to learn about anything to do with aether, aether use, and anatomy, and she's working hard to make sure everyone gets home safely and in one piece.

Thank you for your interest in Ebonheart Company! If you are interested in applying for the Company, we encourage you to click the button below and fill out the application.

If you have any questions about the Company or the application process, please do not hesitate to reach out to one of the officers!

We look forward to hearing from you!